gilvolaris on 19 November 2022 about Volaris in category Airlines

for those who can help me in this complaint that I have.

Trip the Tijuana to Culiacan on Nov. 07. I paid for a suitcase and the second suitcase went over 12kG and then I paid to transport it down the plane. The return flight from the Culiacan to Tijuana. I had a bad experience with people about charges for charging me twice as much as I pay for the 12KG suitcase. In Culiacan they charged me double this charge and it is not fair that in Tijuana I paid less than in Culiacan. I think I abuse surcharges and charge myself more than I should. this is why I do not fly again for Volaris to steal more money than I should. I have compias of what they charged me that was 1400 pesos instead of 600. That’s why I hope by this means I give a credit over charge of my luggage, i have flown by Volaris and I had never been bad exoerience. I don’t know if they have people who go beyond their post and start stealing for the company.

by giving me a refund 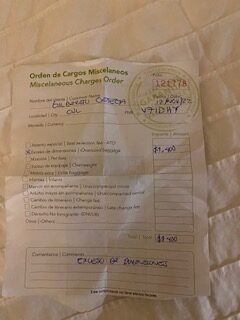